Let me introduce Karen… She’s out in Oregon, doing her own preparations for the EBC trek. As you can see from the picture gallery below, she is well on her way to acquiring and testing her gear – even to the extent of going outside in 20 degree weather to test her sleeping bag!

Karen is also a hardcore fitness fanatic who is going on weekly hikes in the hills and mountains around her hometown. Since she lives at roughly 4,300 ft above sea level, she is getting a bit of altitude training in as well. 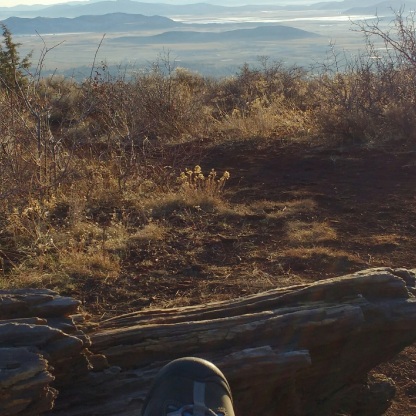 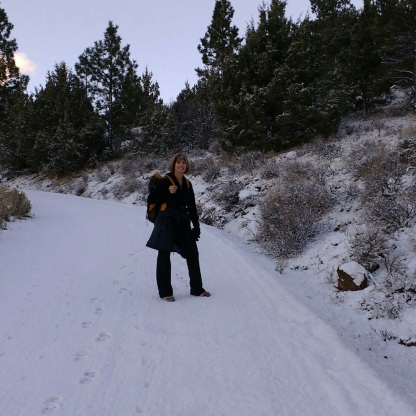 For the past week or so, we’ve been experiencing single-digit temperatures at night and teens and 20’s during the days… the news has labeled the weather event a “bomb cyclone” – a pretty dramatic name for extremely low barometric pressures coupled with a polar vortex of frigid air.  To me this was a prime opportunity to once again test some of the gear we’ve purchased for our Himalayan trek.

Ron was unable to hike because of some nasty 24 hour bug, but John (my son) was an enthusiastic partner in my crazy plan to go hiking in extreme temperatures. My wife (Joanie) simply thought we were crazy! A couple of days earlier I had purchased some gloves and was anxious to try them out.

Anyhow, John and I got on the road early and were undaunted that the car’s outside temperature indicator was showing 4 degrees. Our planned hike for the day was a series of trails called Hazel River/Catlett Spur/Sam’s Ridge, essentially 9 miles of interconnected trails near Shenandoah National Park. When we arrived, the temperature had risen to a balmy 9 degrees, so undeterred, John and I geared up and began our hike along the frozen trail.

Once again, effective layering of various base, mid and outer layers resulted being comfortable throughout the hike (as long as we were moving and out of the wind!). My hands got cold, but all-in-all not too bad for a 5 hour hike in temps ranging from 9 to 15 degrees with a sub-zero windchill. 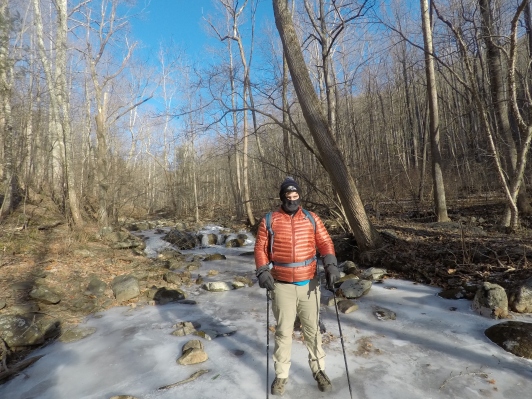 I was excited to test out my new Osprey Hydration Bladder, but quickly discovered that the drinking tube was frozen. Thankfully I had some other bottles of water that didn’t fully freeze until near the end of the hike.

It’s November 24, 2017 (the day after Thanksgiving) and Ron and I completed our first training hike, accompanied by my son John. We couldn’t have asked for a nicer day with clear skies and temperatures in the low 50’s. Since we live in Virginia, we have access to numerous hiking trails in and around Shenandoah National Park, including portions of the Appalachian Trail. Today we chose the White Oak Canyon/Cedar Run circuit, a total distance of about 7 mi, with a long ascent and descent… good conditions to simulate the climbs and descents we will experience in our daily treks in the Himalayas (albeit without the lack of oxygen!)

So there I was, enjoying an invigorating hike, pleased with my fitness level, when out of the blue I lifted my right foot and the entire tread of my boot separated from the upper! Apparently the glues that adhere the tread to the upper are only designed to last 10 years and even though the boots appeared in good condition that 10 year period expired midway through the hike!

Fortunately I had some duct tape and medical tape in my pack and was able to apply a quick repair that allowed me to continue hiking. The repair ultimately held for about 3 miles before the entire upper began to unravel ufrom the inner liner. Clearly it was time to get new boots…

Let’s start with some history… This crazy idea for a bunch of 50-somethings to voluntarily hike over 70 miles at altitudes ranging from 9,300 to 18,200 feet above sea level started with Ron (the oldest in our group at 57). Simply put, Ron has a lifetime goal to visit 100 countries and thought that a trek to Mt. Everest Base Camp was an exciting way to experience one of those countries, Nepal. He asked me (Don-54) if I was interested and without hesitation I agreed. Then we shared the idea with the rest of the family and were surprised at the interest… In the end, Karen-55, Alan-53, and Debra-53 (Alan’s wife) all decided that this would be a great adventure, made better by the shared family experience.

In Nov 2017, we began to explore trekking options… We discovered that there were quite a few trekking companies who offered guided trips that included all of the logistics (transportation from Kathmandu, lodging, food, porter services, and expert knowledge of the culture, climate and terrain). For our part, we had to commit to a dedicated fitness plan to prepare our bodies (as much as we could) to endure two weeks of hiking at high altitude.

We selected Ian Taylor Trekking, based in Vail, Colorado, made our deposits, and now we are committed!!…