Once again our annual rafting trip on the Rogue River was fun and memorable. With days spent floating down the river (with the occasional rough water to keep things exciting) and nights spent relaxing around the campsite, playing games and enjoying each other’s company, the stresses of the world melted away.

We enjoyed our usual flotilla consisting of an assortment of nautical vessels. We had two “Cadillacs of the River,” the large, self-bailing rafts with fixed oars; one 6-person powered paddle raft (the four wheel drive SUV of the river); and finally four single-person kayaks and pontoons (the sports cars of the river).

Our two days on the river consisted of the usual pre-float safety brief to ensure everyone was prepared for the day ahead. The only challenge here is getting everyone into the same space at the same time listening to the same message. Once the perfunctory reminders about life jackets, overboard procedures, and boat ramp logistics was completed, it was time to get on the river.

Both days couldn’t have been better… the weather was perfect and the water refreshing. In the calm waters, some took the opportunity to slip in the cool river, engage in water cannon battles, or jump off rocks, while others simply soaked in the sun. We even had a brief glimpse of Superman, who must have been taking a day off to enjoy a flight over the river… 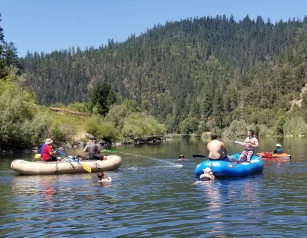 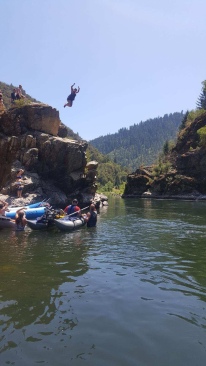 At camp is where the real drama occurred. This was our first year at a full-service campsite with trailer hookups, and restroom and shower facilities. For the tent campers among our group, the convenience of clean restrooms and warm showers was a well-appreciated bonus. For the trailer/camper group, it was nice to have a level pad with full water, sewer, and power hookups.

The perfect setup, right?… Well unfortunately the peace and serenity of the shared campground was upset by a few curmudgeonly neighbors. These are the type of people who don’t seem to understand that when they are on vacation the “normal” standards of property rights don’t apply to a rented campsite.

Cody aspiring to play the bagpipes like his Dad!

As it was, our direct neighbor approached us literally as we were backing the camper onto the pad. What was seemingly a friendly welcome to the campsite, was instead a subtle “marking of territory.” It seems we were camping next to a group who reserved the same campsite year after year and wanted to ensure that the newbies (us) were aware of how the campsite “worked.” Needless to say, we didn’t appreciate the unsolicited advice when they told us where we could and could not set-up our tents and other assorted camp gear.

What started as a minor annoyance evolved into nighttime entertainment, when part of the same group of tightly-wound campers decided to pack up and leave in the dark while the rest of the camp was relaxing in their various sites enjoying the evening. So, what would drive someone to leave prematurely?… Well apparently all it took was a couple of campers “trespassing” onto the outer edges of their campsite. Without the benefit of official survey marks, it was difficult to ascertain where the boundaries of the paid pad ended and the public right-of-way began.

These “violations of personal space” were apparently too much to take for one camp group, so they decided to pack up and leave. In their haste to make a quick departure, they invariably took some shortcuts packing their gear and preparing their trailer hookup. The shortcuts and darkness resulted in over an hour of repeated attempts to get the trailer hitch properly seated. As we watched over the next hour from our chairs around the campfire, we were finally relieved (for them) that they were on their way back to what we all hoped would be a less stressful place.

Despite the drama (and in some ways because of it) this was another memorable weekend. Onward to the next adventure.

3 thoughts on “Campground Claimants and Curmudgeons”